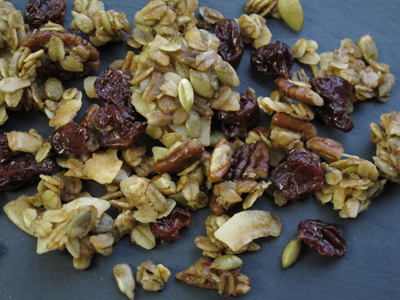 granola Breakfast, Recipes Comments are off

I thought I was done experimenting with existing granola recipes, but my list keeps growing. This one by Molly Wizenberg is fairly simple, and has most of the things I want in my granola – oats, coconut chips, pepitas.

This isn’t an overly sweet granola, either – just a bit of brown sugar and maple syrup. Sunflower seeds are a new addition for me. I made one small change to the recipe. I added a slightly beaten egg white to the mix so it would clump better, knowing that just maple and olive oil wouldn’t make a clumpy granola on its own.

When it came out of the oven, it was kind of sticky, and it didn’t seem to get less sticky as it cooled. I took a couple of tastes and wasn’t that impressed.

A couple of days later I grabbed a handful to stave off hunger… and I was surprised. It became really good. Addicting, really. The stickiness was gone, and it had good sized clumps along with a bunch of loose bits too. I’m thinking about replacing the sunflower seeds with hemp seeds instead – similar flavor profile, but more healthy. 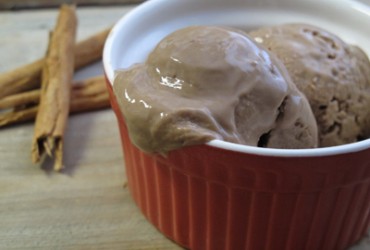