Finally, I’ve started to dip into Baked Explorations. I thought the maple cupcakes would be first up, but these fabulous brownies won out since we’re traveling and they’re a great treat to take along. A few went to work as well, and I got multiple requests for the recipe.

These are a little more work than your standard brownie, but so worth it, especially if you’re a fanatic for salty sweets like Larry and I are. The first step is to make a salty caramel. The brownie batter is somewhat standard, but includes primarily melted chocolate and only a small amount of cocoa powder… making them even more indulgent. Half of the brownie batter is spread in the pan, then topped with caramel, then the rest of the brownie batter goes on top. Once they’re done, they get a sprinkle of coarse sugar and fleur de sel.

The result is a wet, dense brownie due to the caramel. I love the bit of salt on top. Love, love, love these brownies. I first got a taste of them at Omnivore Books – the authors of the book were giving a talk and signing books. They’re really nice, funny, genuine and laid back. And they’re doing great things for American desserts. At Omnivore Books with Renato Poliafito and Matt Lewis, authors of Baked Explorations.

Make the Caramel:
In a medium sauce pan, combine the sugar and corn syrup with 1/4 c. water, stirring together carefully so you donÃ¢Â€Â™t splash the sides of the pan. Cook over high heat, until a thermometer reads 350 degrees and is dark amber in color.

Remove from the heat and slowly add the cream (it will bubble up). Then add the fleur de sel. Whisk in the sour cream. Set aside to cool.

Make the Brownie:
Preheat oven to 350. Butter the sides and bottom of a 9 x 13 pan. Line the bottom with parchment paper. Butter the parchment.

Add 3 eggs to the chocolate mixture and whisk until just combined. Add the remaining eggs and whisk until just combined. Add the vanilla and stir until incorporated. Do not overbeat the batter at this stage or your brownies will be cakey. Add the flour mixture. Using a rubber spatula, fold in the dry ingredients until there is just a trace of the flour mixture remaining.

Bake the brownies for 30 minutes, rotating the pan halfway through. Brownies are done when a toothpick inserted in the middle comes out with a few moist crumbs. Remove the brownies from the oven and sprinkle with the fleur de sel and the coarse sugar. Cool completely before serving. 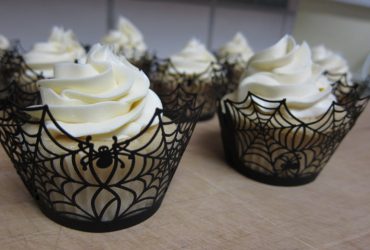 Next Article   Fall Back to Kitchen Safety