I attended a book signing by Jeni Britton Bauer at Omnivore Books months ago and I’m finally just getting around to making the first recipe out of the book. Our neighbor Assana is just slightly addicted to Jeni’s ice creams – maybe more than slightly, since the only way to get it is to order from them in Columbus, Ohio. It turns out they ship a LOT of ice cream to the SF Bay area.

I tend to prefer a custard base for my ice cream, but Jeni’s is different. The base uses cornstarch and cream cheese for a thick, creamy texture – no eggs. It’s only slightly more complicated than a custard base and doesn’t require straining because there’s no chance of getting bits of cooked egg in there.

The first time I tried to recreate this flavor was after I tried some from one of Assana’s orders. I loved it. Chunks of moist, caramel-soaked cake and a buttery, creamy base. The book wasn’t out yet but there was a published recipe for the vanilla base, so I made that and added chunks of real Gooey Butter Cake that I had soaked in a brown sugar caramel sauce. It was good, but not quite right.

There are a couple of secrets to the recipe. Frontier Butter Flavor added to the base just before freezing (ew, right? But I had to follow the recipe). And the cake isn’t actually a gooey butter cake, it’s just a plain, think, all-purpose yellow cake that soaks up flavors really well in addition to holding its shape when added to ice cream. And the caramel sauce. I had it wrong with brown sugar – it’s honey butterscotch sauce.

The verdict? It’s damn good. Creamy and thick without being fatty, and the chunks of cake are terrific. I delivered a pint to Assana in a real Jeni’s container with a real Jeni’s label, just for good measure. 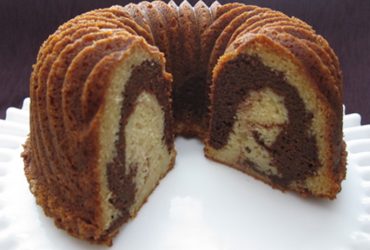