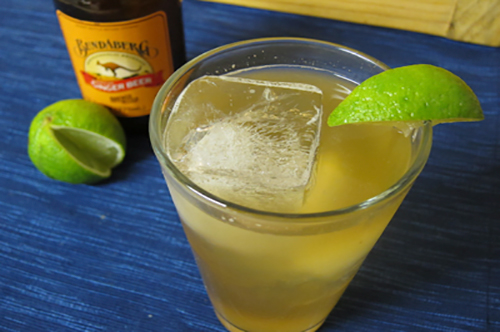 When Larry and I were in Grenada and Barbados last fall, we toured four rum distilleries. And we drank countless rum-based cocktails (rum punch and planter’s punch in particular) – thus began our love affair with rum. We brought back a couple of bottles – one white rum from River Antoine (Grenada’s oldest rum distillery) and a bottle of R.L. Seals dark rum from Foursquare in Barbados.

The recipe for rum punch is easily remembered with a local rhyme:
“One of sour, two of sweet
three of strong, and four of weak”
This translates to one part lime juice, two parts sugar, three parts rum and four parts water. We didn’t drink any Dark & Stormy cocktails on that trip, which is surprising in hindsight – good ginger beer is abundant.

Back to the Dark ‘n’ Stormy (the official version, capitalized and spelled with ‘n’ instead of an ampersand), which has an interesting history. The drink is actually trademarked by Gosling’s Rum, which is unusual given that recipes themselves can’t be trademarked. The company aggressively defends the trademark, which specifies the precise ingredients and amounts included in a Dark ‘n’ Stormy (Gosling’s Black Seal rum and ginger beer, nothing else). There’s an article with more on the trademark here. Gosling’s even goes as far to sell their own conveniently packaged Dark ‘n’ Stormy in a can.

I didn’t make the official, trademarked drink. I used 2 oz. of R.L. Seals dark rum, 6 oz. of Bundaberg Ginger Beer and a wedge of lime. And it’s delicious. Quality ingredients are important here since there are only two. I’m curious to try it with Gosling’s but I don’t think I’d use any other ginger beer – Bundaberg is delicious. Note that ginger ale is not the same as ginger beer, and using ginger ale will give you a very different cocktail.