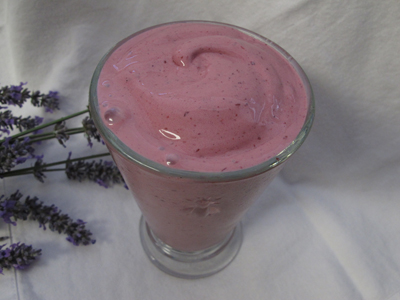 I make a lot of ice cream, but I rarely make shakes. I’m not sure why – it’s just a drinkable form of ice cream. Many shakes include milk, so there’s an extra bump in calcium and protein as well (I’ve even been known to eat ice cream for breakfast!).

At 8 PM Eastern/5 PM Pacific, Adam Ried (the same Adam Ried that’s the equipment expert on America’s Test Kitchen!) will be on Twitter (@modernmilkshake) talking shakes and his book, Thoroughly Modern Milkshakes. You’ll have a chance to chat with Adam and fellow partygoers about your shakes using the hashtag #GreatShakes. And there will be door prizes!

I picked this shake because I have a lavender compulsion – my neighbor has hundreds of plants and when it’s in bloom, I go crazy over it. I’ve paired it with blueberries (in a lavender-blueberry sorbet), but never with blackberries. It’s a great combination, though.

There isn’t any milk in this shake, besides what’s in the vanilla ice cream. Instead, the added liquid is in the form of lemon juice and a lavender-blackberry coulis, which is delicious. The coulis is fantastic on its own, especially before adding the lavender. The lavender is pretty strong in the coulis, but it results in a lovely muted floral flavor when mixed with the ice cream.

This is a really thick shake, so I ate mine with a spoon. A good blender is a big help (I love my Breville Hemisphere). I put part of it into a container to save for later, but it never made it into the freezer. Whoops! 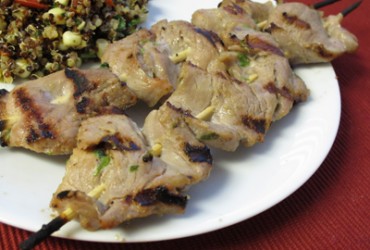