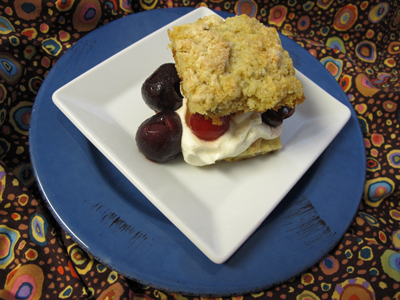 It’s time for Bake Together, and since it’s July it means I’m completely obsessed with lavender.

My neighbor’s lavender is in full bloom, and this year we have two bee hives stationed on the side of her house. They love the lavender even more than I do and are busily making honey from the pollen.

The shortcakes were a pretty easy choice for me. Lavender, of course. I also amped up the vanilla by swapping in vanilla paste instead of extract. Normally I add lavender flavor by steeping in in the liquid, but this time I just chopped it up and added it to the dough.

I’m guessing my omission of the chocolate probably did something to the dough, and I did nothing to compensate other than add a teeny bit more flour. My shortcakes spread out wildly and came out pretty flat. But oh, they taste so good! I just trimmed them up and used two instead of slicing one in half.

It’s getting a little late for cherries – they’re no longer in my farmer’s market, but I can still find them in the grocery store. The cherries match up so nicely with the lavender. I love cherries. A lot. But I don’t like spitting pits. I admit it, I’m a pit eater. Larry thinks it’s weird. The only way I’ll eat cherries without the pit is if they’re pitted – which is what I did here. I’ve used a number of pitters, but the one I like best is the one from OXO. It’s small, but relatively clean and very quick and reliable. I pitted two pounds of cherries, and ate the leftover ones that I didn’t use in this recipe. Sans pits!

There was no way I was going to mess with the whipped cream – nothing better than cream, mascarpone and sugar.

To make the shortcakes:
1. Position an oven rack in the center of the oven and heat the oven to 400Â°F. Line a cookie sheet with parchment or a nonstick liner.

3. Put the flour, sugar, baking powder, baking soda, and salt in a food processor and pulse until well blended. Add the cold butter pieces and lavender and, using short pulses, cut the butter into the flour until the mixture resembles coarse meal with small pieces of butter (about pea-sized) still visible, about 1 minute. Scrape the mixture into a large bowl.

4. Pour the buttermilk and vanilla over the flour mixture and, using a rubber spatula, stir and fold until it forms a shaggy, moist dough with some floury bits remaining. Scrape the dough and any remaining floury bits onto the counter and knead a few times until the dough is evenly moist and holds together well.

5. Gently press the dough into a thick 8 x 4 -inch rectangle. Using a large sharp knife, trim the edges to make a neat rectangle and cut into 8 equal squares. Arrange the biscuits on the prepared cookie sheet about 1 inch apart. Sprinkle the tops with the sanding sugar, if using. Bake until puffed and spring back when the tops are gently pressed, 16 to 18 minutes. Move the sheet to a cooling rack and let the biscuits sit until theyâ€™re cool enough to handle, about 15 minutes. Serve warm or at room temperature.

To make the cherries:
1. In a medium bowl, combine the cherries, sugar and Kirsch. Toss until blended. Taste the berries and add more sugar, if needed. Cover the bowl and refrigerate, stirring occasionally, until the berries have released some of their juices or up to 4 hours.

To make the whipped cream:
1. In a medium bowl, combine the cream, mascarpone, sugar and vanilla paste. Using an electric mixer, beat until medium firm peaks form when the beaters are lifted. Serve immediately or cover and refrigerate until ready to serve or up to 3 hours.

To serve:
Warm the biscuits if made ahead (a toaster oven set on â€œbake 300Â°Fâ€ is great for this). Using a serrated knife, cut the shortcakes in half crosswise and place the bottom halves on serving plates. Spoon some of the cherries, including the juices, over the shortcake and top with a big dollop of the whipped cream, cover with the remaining biscuit lids. Top with a dollop of the whipped cream. Serve immediately. 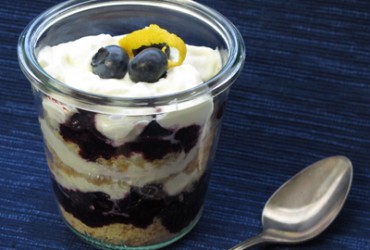 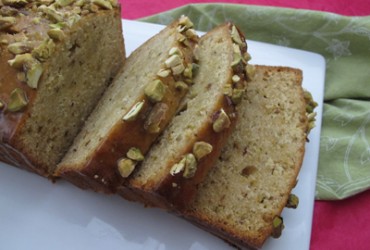