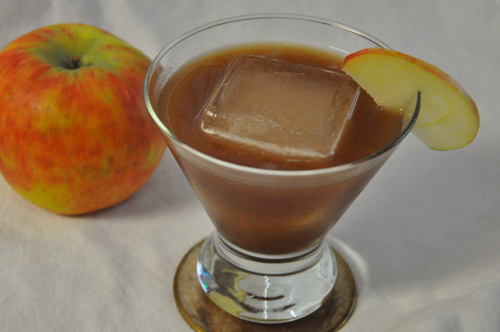 I’m really not very good at coming up with cocktail names. I think it’s a special talent, one which I’m clearly lacking. At least the cocktail name is the least important part – how it tastes is what really matters.

I called this one The Tipsy American because it’s as American as apple pie (rum, bourbon, apple butter). And tipsy, because it’s got a lot of booze in it.

I’ve pretty much decided that my favorite drinks are usually some variation on a specific theme – usually involving whiskey, lemon juice, and maple syrup. It’s a combination that I love every time. This cocktail starts down that route, with whiskey and lemon juice, but I added cinnamon simple syrup and apple butter – for an apple pie flavor (and aroma!). And there’s some apple brandy in there for good measure.

I also included a few dashes of bitters – mission fig, in this case, since that’s what I had. But anything along those warm, fruity lines would be nice.The Bitter Truth Old Time Aromatic Bitters would probably be even better.

Just a suggestion for taking this over the top – for dessert, perhaps? I think it would be great served as a float, with a scoop of vanilla ice cream in the glass. A grown-up float.

This is my first time using apple butter in a drink. I’ve made a drink with fig jam, though, so I figured it would be fine. Musselman’s sent me a jar of their apple butter to try out in some recipes. It’s dark and really aromatic. The texture is smooth, too – I didn’t want the drink to end up grainy.

The Musselman’s apple butter reminds me of my grandma’s apple butter. She was a pretty awful cook, but the one thing she did really well was apple butter. My preference will always be for homemade, but jarred is a close second (I rarely have the patience to make my own). I’d be even happier if Musselman’s used cane sugar instead of corn syrup.

Want to judge for yourself? Just leave a comment here – what’s your favorite use for apple butter? I’m always looking for new ideas, and I’ll choose one commenter using random.com to receive a jar of Musselman’s apple butter along with a handmade kitchen spurtle. Yes, a spurtle. Giggle away. Leave your comment by Wednesday, November 7, 11:59pm PST.

Musselman’s provided me with a jar of apple butter along with a handmade spurtle, free of charge. I like the apple butter, and I wouldn’t do any sort of work with them if I didn’t. Check out Musselmans.com for more Apple Butter recipes and a limited-time coupon. You can stay up-to-date on all things Apple Butter by following Musselman’s on Facebook, Pinterest and Twitter.

Add all ingredients into a pint glass. Shake with half a glass of ice cubes in Boston shaker until chilled. Strain into a chilled cocktail glass (with a large cube of ice, if you want).

Bring the sugar, water and cinnamon sticks to a boil in a small saucepan over high heat and cook until the sugar is completely melted, a minute or so. Remove from the heat. Strain, transfer to a container with a tight-fitting lid, and refrigerate until cold, about 1 hour. 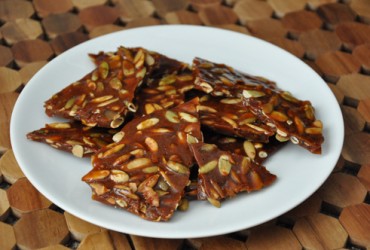 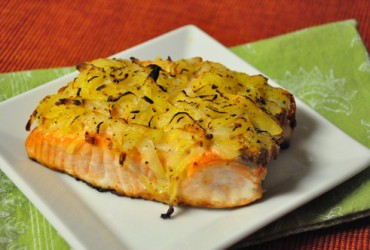