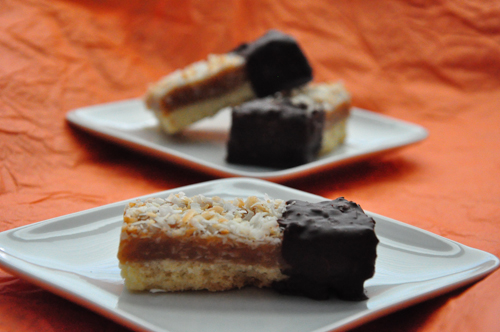 These decadent bars are a take on the popular Girl Scout cookie, the Samoa. Coconut, chocolate, shortbread, caramel. I’m sold.

The shortbread is really good. Kind of crumbly, but not dry at all. On top of the shortbread goes caramel. And then that’s topped with toasted coconut. And then the bars are dipped in chocolate.

These have potential, a lot of potential. The flavors are great. But I had a lot of trouble with the caramel. It cooked up fine, and tasted delicious. But after some time in the refrigerator (per the recipe’s instructions), it was rock hard and cutting the bars was near impossible.

And there lies the problem with blindly following a recipe – once I actually thought about it, I decided that the caramel should probably not have been taken to hard ball stage (250 degrees). It likely would have been better at soft ball stage instead (240 degrees).

But then the advantage of baking with a group is that you get the combined experience and brainpower to come up with a better solution. Several other bakers had the same issue, but had better luck with 235 degree caramel. I love my Baked Sunday Mornings group!

I had to let the bars sit for quite a while at room temperature before I could cut them without completely crumbling the shortbread (which is delicious, by the way).

Once the bars are cut, they’re dipped in chocolate. It was messy, I ran out of chocolate, and there were bits of coconut everywhere. Next time, I’ll just drizzle the chocolate over the top. Less chocolate per bar, but also less messy, and it will help hold some of the coconut in place. 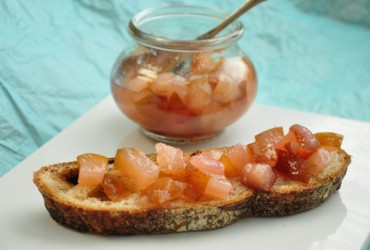 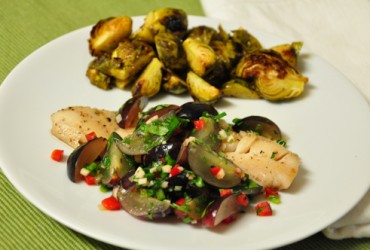