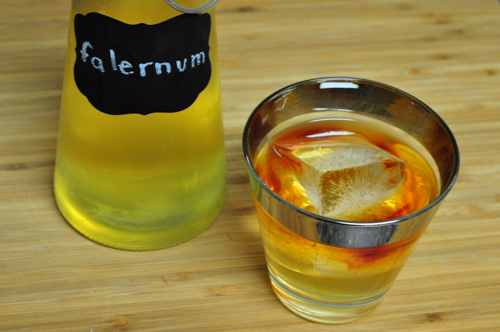 We were first introduced to the funny-sounding falernum in Barbados in 2011. We were at the RL Seale rum distillery and the woman that was pouring rums for us to taste made us our first corn-n-oil (rum, falernum, Angostura bitters). We were hooked.

Falernum is a fairly simple liqueur – rum infused with spices and lime, plus cane sugar. It’s everywhere in Barbados, and I hope it becomes more popular here in the US with the rise in popularity of cocktail culture.

We didn’t buy falernum in Barbados, but we found we could get the most popular brand here – John D. Taylor Velvet Falernum. It’s been a staple in our ever growing home bar ever since.

Usually I just make a corn-n-oil as I did here, because it’s one of Larry’s favorite drinks. He likes it with equal amounts of dark rum and falernum, plus a couple of healthy shakes of bitters. I’ve also been making a Barbados cocktail, which is equally delicious.

I’ve had bartenders tell me that falernum is pretty easy to make, so I finally decided to do it. And it is! It takes very little time and effort. I made one change to the recipe – I toasted just the cloves, and soaked them in the rum (nothing fancy needed – I used Bacardi) alone for 24 hours before adding the toasted almonds, lime and ginger to the mix. Then I let it sit for another 24 hours before straining. I was hoping for a bit more clove flavor in the final product.

There’s a lot of goop in the mix, so I strained it first with a fine strainer, then cheesecloth, then put it through a coffee filter. The final addition is a rich simple syrup and some lime juice. And it’s really delicious – good on its own, over ice, and terrific in a cocktail. I’m not sure I’ll ever buy Velvet again. 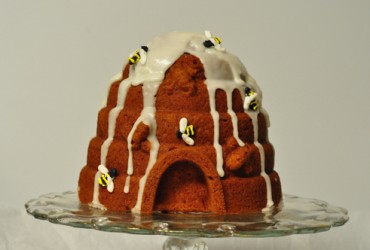 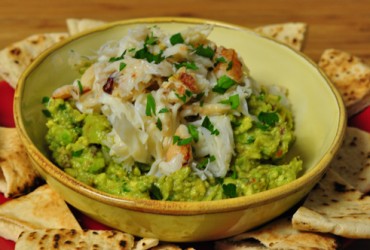 Next Article   Brown Butter Guacamole with Porcini and Crab