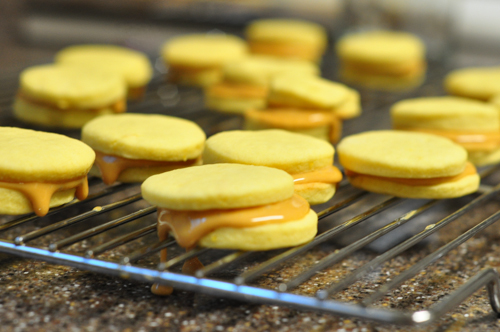 Larry got a couple of decent photos of these cookies immediately after I put them together, but I decided to show a later image so I don’t have to describe the horrors that are happening in my kitchen right now.

Despite my love of all things caramel, alfajores aren’t my favorite cookie. It’s the sandwich thing. I’m not sold on the idea – I like my cookies to be a little more singular in texture, none of this crunchy creamy mixed together stuff. There are exceptions, but alfajores don’t fall in that camp.

The cookies themselves are fairly simple to make, and are mildly lemony and slightly on the bland side. That makes sense – they are just a vehicle for the dulce de leche, right? The dough was really wet but after some time in the refrigerator it was easy to roll out. They’re kind of dry by themselves.

Then there’s the dulce de leche. I love it. And to be honest, I usually just buy it at the store. It’s really good, and it’s reliable. But I decided I’d make it this time since it’s been a while since I made it from scratch.

The book gives three methods for making the dulce de leche – stovetop, microwave, oven. I like having options, but I went ahead with the stovetop method, which is as simple as dumping condensed milk into a double boiler with a bit of salt, and letting it cook down until it’s thick and caramel-y.

My dulce de leche was not done in the 1.5-2 hours suggested by the recipe – at 4 hours, it looked fairly dark and thick and I was happy with it. I’m not the only baker in the group that had this experience, and I faintly remember it taking a long time when I’ve made it in the past.

Here’s where things went wrong. It was late, so I put the dulce de leche in the refrigerator overnight. I took it out the next day and whipped it up a bit in the mixer to get the lumps out (per the recipe). It lightened up a bit, but I expected that. It looked fine, and I loaded it up into a piping bag.

It piped out beautifully onto the cookies, and I carefully topped each one and gave them some time to set up. But instead of setting up, they just kind of melted. I think the photo speaks for itself. 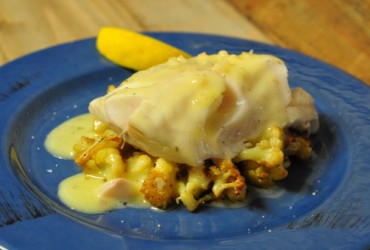 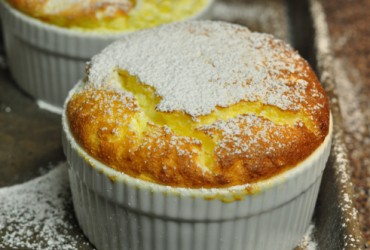