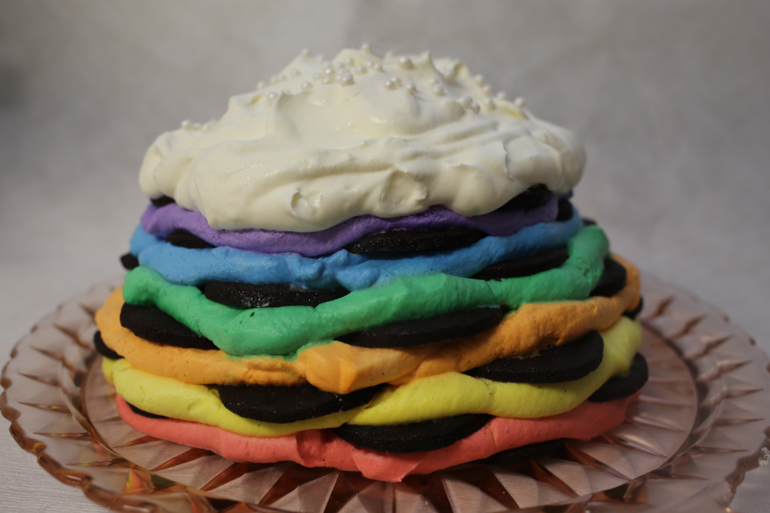 Out of all of the recipes in Baked Occasions, this is the one I’m the most familiar with. It’s also the one I’m glad to get out of the way for Baked Sunday Mornings, because it was a lot of work to get here.

I have an intimate relationship with this cake. It started with the photo shoot for the book – I had the privilege of being on site for the shoot in the Fall of 2013. This cake was one of the few recipes that hadn’t been tested yet, but I figured it probably wasn’t a big deal, it’s a simple cake. Layers of chocolate cookies and whipped cream – how much testing would it actually need? Bear with me here, this is a long story. It also explains why there’s a blurb in the book acknowledgments about me and my relationship with The Gay Cake.

One of the bakery staff members showed up the day that they were photographing the cake with cookies and heavy cream in tow, and she quickly assembled the cake before sticking it in the refrigerator. It was beautiful, a glorious rainbow of sweet cream topped with a big fluffy cloud of even more whipped cream. And after photos were taken, I got to try the cake – delicious. Imagine an infinitely better version of the one your mom may have made with Nabisco Famous Wafers and Cool Whip. It’s a heavenly rendition of pure cookies and cream.

I came home from New York, and soon after, I tested the recipe for the first time. I didn’t assign it to anyone else, thinking it’s so simple, I’ll just bust it out quickly (plus… I may have wanted to eat more of it).

Boy oh boy, was I mistaken. The cake was a disaster. The whipped cream became grainy after I added the food coloring. The cookies were too thick and hard, so the cake didn’t slice well and had a weird texture. After a few hours in the refrigerator, the cream started to weep, resulting in colors oozing together and a puddle of watery colored liquid at the foot of the cake.

I sent my notes back to Matt, who revised the recipe and sent it back for more testing. I didn’t re-test the revised recipe – any time a recipe was revised, I’d have a couple of different testers try it out. I knew our recipe testers were a great group, but this one really challenged them. Again, lots of problems, and poor Matt, we sent back more notes. I think this was the only recipe in the book to fail after being revised.

Some time passed, and Matt and I emailed about the cake. The bakery staff would make the cake, and it turned out beautifully. Then Matt would make it.. and it was still problematic. We went into detective mode, dissecting every single aspect of the cake – type of flour, cocoa powder, fat content of the cream, food coloring brand, cookie thickness… everything.

I started obsessively making tiny versions of the cake (a few cookies stacked with some whipped cream), changing one or two things at a time. First I focused on the cookies, tweaking ingredients so we had a dough that was super flavorful and sturdy enough to be rolled very thin. I experimented with different thicknesses and settled on 1/8″.

Then I turned to the whipped cream. I bought boxes of Nabisco Famous Wafers, which aren’t bad until you taste them next to the homemade cookies in this cake. This recipe is worth it for the cookies alone – they’re delicious. Anyway – I didn’t want to keep making cookies, so I leaned on Nabisco while I worked on the whipped cream.

A gazillion tiny cakes later, I settled on a somewhat arduous process of stabilizing the cream with creme fraiche, followed by a few hours of draining the partially whipped cream through cheesecloth in order to make for a sturdier cake that wouldn’t weep colors everywhere.

By this point I was ready to start making cakes again. I enlisted the help of my coworker (and Netflix Waffle Day partner), and we rolled out cookies and made cakes for several nights after work. Once it was all over, she told me she never wanted to make or eat The Gay Cake again. I get it!

We made two versions that eventually went to work with me – one was blue and white (I didn’t want to ruin the rainbow surprise), and the other was purple, green and white – Larry’s favorite, since it was Mardi Gras. The recipe was then ready for more testing by our devoted group. I didn’t warn anyone, not wanting to bias them against the cake, but needless to say, there were lots of colorful comments in the feedback. We bonded over our shared Gay Cake pain.

Fast forward to today, it’s Gay Pride month, and a few intrepid bakers tackled the cake. This time, I posted a long comment with advice on the cake, and gave the group a heads-up on what they were in for. Dafna, who had made the cake a couple of weeks prior (I sympathized with her via text, and assured her that her cake was beautiful, and that the one in the book is impossibly perfect), did the same.

And… that’s the story of me and The Gay Cake. I took mine to work on Friday. It was far from perfect, but my coworkers loved it. 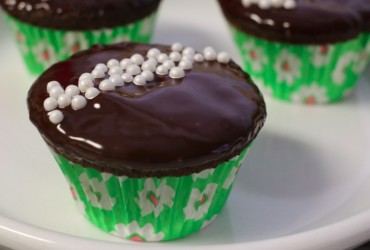 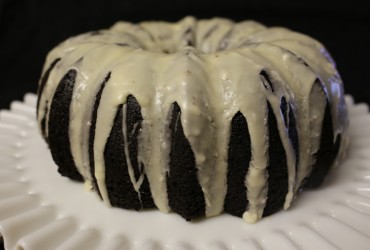