This is the second, or maybe third time I made this cheesecake.

The first time (or two? I can’t remember.) was during recipe testing for Baked Occasions. So I don’t feel completely awful that I was sloppy with the recipe and mixed things up a bit this time.

First – I left out the green food coloring for the first time. All natural, baby, all natural. Next, I left the pistachios and most of the cream out of the white chocolate layer. On purpose? No, just not paying attention. The result was a much more pronounced separation of layers, which I thought was kind of pretty.

The last change I made had everything with me trying to do a bunch of other things while I was finishing off the sour cream layer, and nothing to do with me being inventive. I bumped the oven temp up a bit and turned on the broiler element because I had found before that the sour cream didn’t set up the way I wanted it to, and it took too long as well. I checked it every 20-30 seconds, but it went from creamy and sour cream white to crispy and deep brown in a matter of seconds. Whoops.

I left the cheesecake in the refrigerator for a couple of days while I decided what I was going to do. I really didn’t want to make it again. And ugh, I didn’t want to dump the whole thing in the trash. But it was not edible in the current state.

I finally decided to get out my long serrated knife and lop off the top of the cake. It’s a pretty thick cake anyway, and I took off the tiniest sliver. Huh – it turned out really pretty, mottled from the pistachios and very symmetrical.

I brought the cake to work. People raved. They said how beautiful it was. I like this cake quite a bit, although it’s not my most favorite cheesecake. Larry doesn’t like the pistachio that much. One of the things I do like is that it turns out with a nice, creamy texture despite not baking in a water bath. 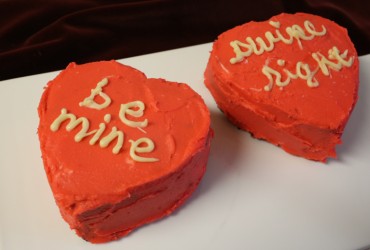 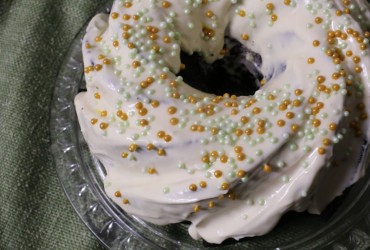