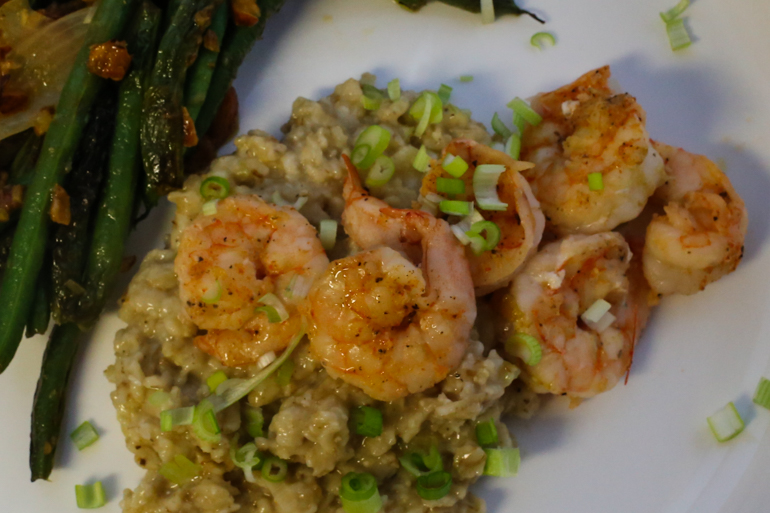 This shrimp recipe isn’t really much of a recipe at all – the shrimp gets a quick pan sauté (no seasoning, other than a bit of cayenne and black pepper, and salt, which the recipe strangely omitted).

It was the savory oats that caught my interest. These are old fashioned oats, cooked stove-top with some sliced scallions until they’re creamy. Pungent, salty parmesan bumps them all the way over to the savory camp. We liked them quite a bit, but not necessarily with the shrimp. I thought I’d actually like them for breakfast. I’m not much of a breakfast eater, but savory oats in the morning sounds appealing.

I skipped the sautéed spinach portion of the recipe and made blistered green beans with smoked almonds from the Gjelina cookbook. As with most vegetables, I’m picky about how they’re prepared. Green beans are especially tricky for me and I usually don’t like them very much. But I did like these quite a bit. And it gave me an opportunity to use some of the lemons from our now-dead backyard tree (AKA Death Lemons™).

When the lemon tree fell over, I picked all of the lemons off and delivered them to my friends Nick and Cortney at Bar Tartine. They preserved them, and they gave me a huge jar of them when I went back for dinner a few months later.

My dessert was a failure. Not complete, because Larry still liked it. But I have a lot of work to do to get it right. I tried to make Künefe for the first time. This is a dessert of shredded phyllo dough with melty cheese sandwiched in between the dough, soaked with simple syrup, and topped with pistachios.

We ate a lot of künefe when we were in Turkey last year. It was one of our favorite foods of the entire trip. The best we had was positively transcendent – in a small town in the middle of the county where no one spoke English. Luckily we had been there long enough to be able to read a menu and know what we were getting. We had the best meal of our trip there, but the künefe was a standout. It was creamy and crispy at the same time, and the cheese was in perfect balance with the pastry. It was topped with clotted cream. I still dream about that künefe.

I did a bit of research and picked a recipe from a Turkish cookbook I found at the library. It called for grape molasses to be brushed on the bottom of the pan. It’s available online, but I improvised and cooked down some grape juice until it was thick and sticky.

The recipe calls for the pastry to be mixed with ghee – but it doesn’t say melted ghee, which is what it should be. The pastry needs to be super buttery so it doesn’t stick to the pan – which mine did. I used Oaxaca cheese instead of buffalo mozzarella, and I think that was a good call, since it’s mild and dry and melts easily. The recipe called for double the simple syrup and pistachios than was actually needed.

The künefe wasn’t a complete failure. Larry and I both had some straight out of the pan, and it tasted good. He said it reminded him of Turkey, so mission accomplished for now. I’ll keep working on perfecting my künefe, though. 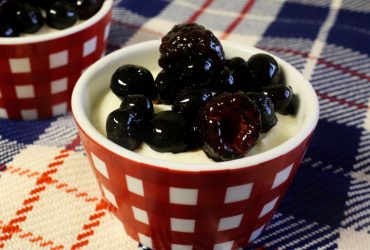