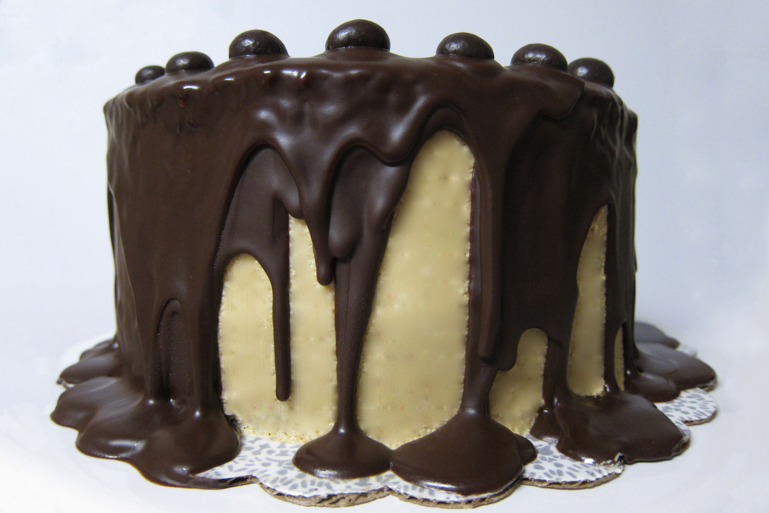 I was a little nervous about this week’s Baked Sunday Morning project. Cakes aren’t a problem. Giant, three-layer cakes tend to be a challenge for me, though. They usually end up crooked or the buttercream somehow slides off. My decorating skills aren’t the best, either.

The first problem I had was lack of pans. I own two 8″ cake pans and several 9″ pans. Somehow I thought I had more than two 8″ pans, but realized I didn’t… after I had made the batter. Go ahead and judge, I didn’t prep my pans before I mixed the ingredients together. Rookie mistake.

I dug through all of my baking pans, looking for something even close, and there was nothing. So I baked two layers first, let them cool, then baked the third. The third layer was a little flatter than the first, but other than that it seemed to turn out fine, despite the batter sitting out on the counter for an hour.

Once the cakes are made, there isn’t much more to the cake. It’s spectacular to look at given how little work there is.

The buttercream is flavored with coffee extract. This is the classic Baked buttercream, starting with heated flour, milk and cream. I’ve never had any problems with this method – my Baked buttercream has always been great. But this time, it just never really came together. Tasted fine, just looked a little grainy and broken.

Thank goodness there’s ganache, which is poured over the chilled cake. Ganache covers a multitude of sins. I had a little bit too much, but went ahead and used it all up so my ugly buttercream was covered up. I kind of like how the ganache pooled at the bottom of the cake.

Our friend Dan stopped in with a couple of his buddies, perfect timing! They all got cake after a dinner out, plus some to take home. This is definitely a cake to share.