I rarely make myself breakfast – it’s just not my favorite meal of the day. Some fruit and yogurt or maybe cereal or oatmeal is about all I can stomach. Along those lines, porridge is one of those things that appeals to me in the morning.

This isn’t a quick meal – it takes at least an hour for the farro to soak up the liquid, which is coconut milk in this case. It’s not a light meal. But it’s good. The farro in my version is dark, because I used Ethiopian Blue-Tinged Emmer. The porridge can be cooked quicker and will be a bit creamier using pearled farro, but I love the chew and earthiness of the emmer.

I suppose this could be lightened up by using water in place of some of the coconut milk. Or even the boxed coconut milk, the one that’s made for drinking. It’s a nice, hearty meal for a cold, rainy morning. 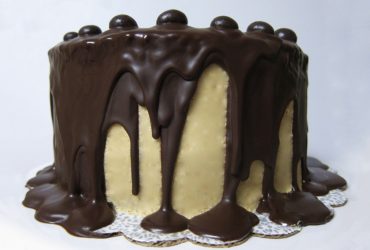