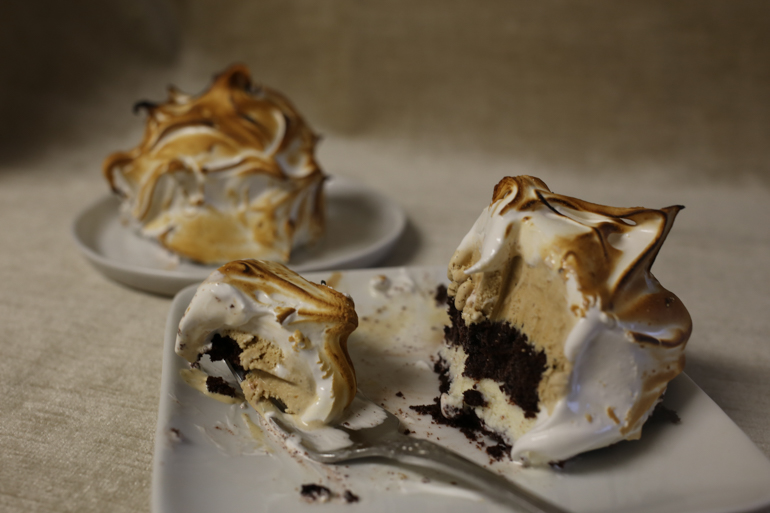 I tackled this week’s Baked Sunday Mornings project with a bit of skepticism and a lot of whining. It’s one of those involved projects that stretches out over hours (or days, in my case), because of the need for freezing the Alaskas at each stage.

The first step was to either make or acquire chocolate cupcakes – Abby Dodge’s Emergency Blender Cupcakes to the rescue. These are a quick and tasty standard chocolate cupcake that can be whipped up in a matter of minutes (especially if you weigh the ingredients straight into the blender). The recipe is from one of my most favorite baking books of all time, The Weekend Baker.

I considered making the ice cream, but decided that store-bought would be better, since it tends to freeze harder than homemade. Plus, I’m lazy and didn’t feel like stretching this out a few more days so I could made two more batches of ice cream. Instead, I used pints of Humphrey Slocombe – vanilla and Vietnamese coffee flavors.

Once the ice cream and cupcakes are on hand, most of the effort goes into construction. I decided to just make three Alaskas. They’re made in a muffin tin, and after each layer is added, it needs time in the freezer. Coffee ice cream first, then half a cupcake, squashed down on top of the ice cream, then vanilla ice cream, and finally another half a muffin. Just finishing this part took me a few days – lots of stops and starts. At least the Alaskas can be constructed according to whatever schedule works for you, as long as you’re not on a deadline.

The (almost) last step is to coat the ice cream-cupcake layered chunks with a swiss meringue – I made half a recipe of meringue, easier to whip eggs in the mixer if you have more eggs. And that way I’d be sure I had more than enough meringue for my three baked Alaskas.

The meringue is delicious (how could it not be?), and it’s not too much of a problem to coat the ice cream-cupcake chunks. Once they’re nicely covered – surprise, back into the freezer again!

The next day I pulled out my ghostly looking blobs and torched them, just enough to brown the meringue. At this point, they’re ready to eat. I suppose they could be made for a crowd (the recipe makes 12), but the torching needs to be done at the last minute.

I didn’t expect to love these, but hmm, they’re pretty good. Larry and I polished off two of them, and someone may have scraped meringue off the third. What happens in the kitchen stays in the kitchen. 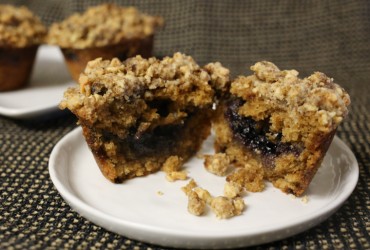 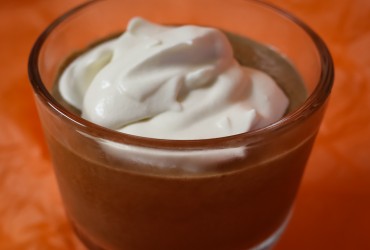