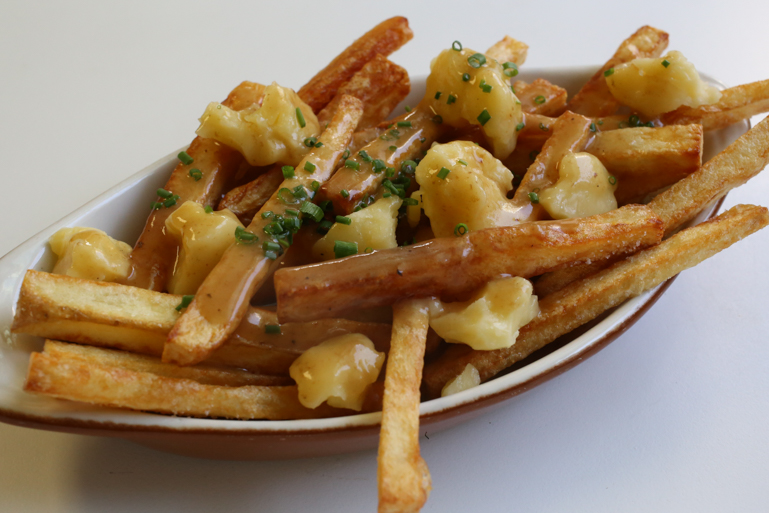 Despite never having traveled to Poutine Country (Quebec), Larry and I have developed a bit of an obsession with poutine. I’m not sure why – maybe because the sound of crisp fries covered in a savory gravy and squeaky cheese curds just sounds too delicious to pass up. Or, it could just be that we’re food obsessed and this is the latest object of our attention.

We’ve eaten poutine at restaurants, primarily in the Bay Area. Some have been very good, some mediocre. I think the key is fries that are crisp on the outside and creamy on the inside and super fresh curds. The flavor of the gravy is important, too, but as long as it’s brown and tasty and doesn’t dominate the rest of the dish, I don’t really care about the specifics.

I did a bunch of research on different recipes, and settled on one for fries, one for the gravy. I have access to fresh curds, but next time, I’ll definitely make them myself, because the ones I used still weren’t squeaky and fresh enough.

The technique for the fries is unique – no soaking requirement, no pre-cooking in lower temperature oil, as is the case for most good french fry recipes. The potatoes and oil are combined in a pot before applying heat. Twenty or so minutes later with the burner on high, and the fries are perfectly cooked. I don’t think I’ll ever make fries another way again – especially since this method uses just six cups of oil. The recipe for the fries appears in a number of Cook’s Illustrated publications – not only online, but also in their TV companion cookbook, and in The Science of Good Cooking.

I settled on a gravy recipe from Serious Eats, for a couple of reasons – first, it uses a hybrid stock with chicken and beef, which I find makes a nice base that isn’t overly beefy (I like to do the same when I make French onion soup).

I deviated a bit from the recipe and cooked the base in a pressure cooker on high for an hour and a half. I also cut the recipe in half and ended up with 5 1/2 cups of stock. It made enough gravy that I was able to freeze half of it for later.

Other than my desire for fresher curds, we loved this dish. I admit that this was our entire dinner – just poutine, and a couple of cocktails. Sometimes it’s fun to be a grown-up. 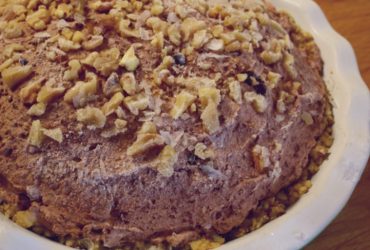 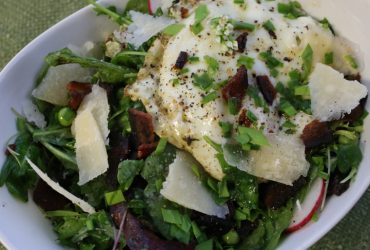